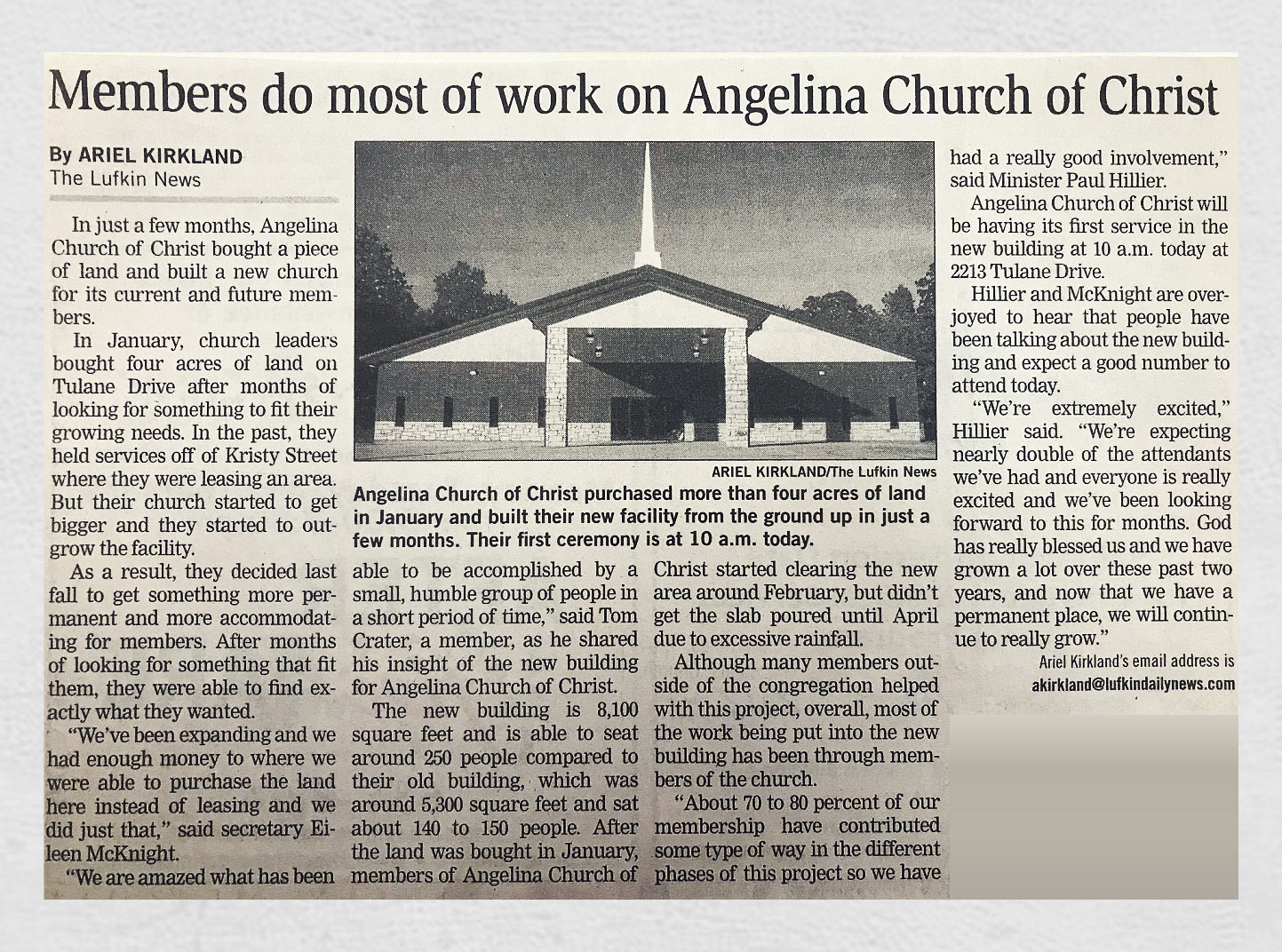 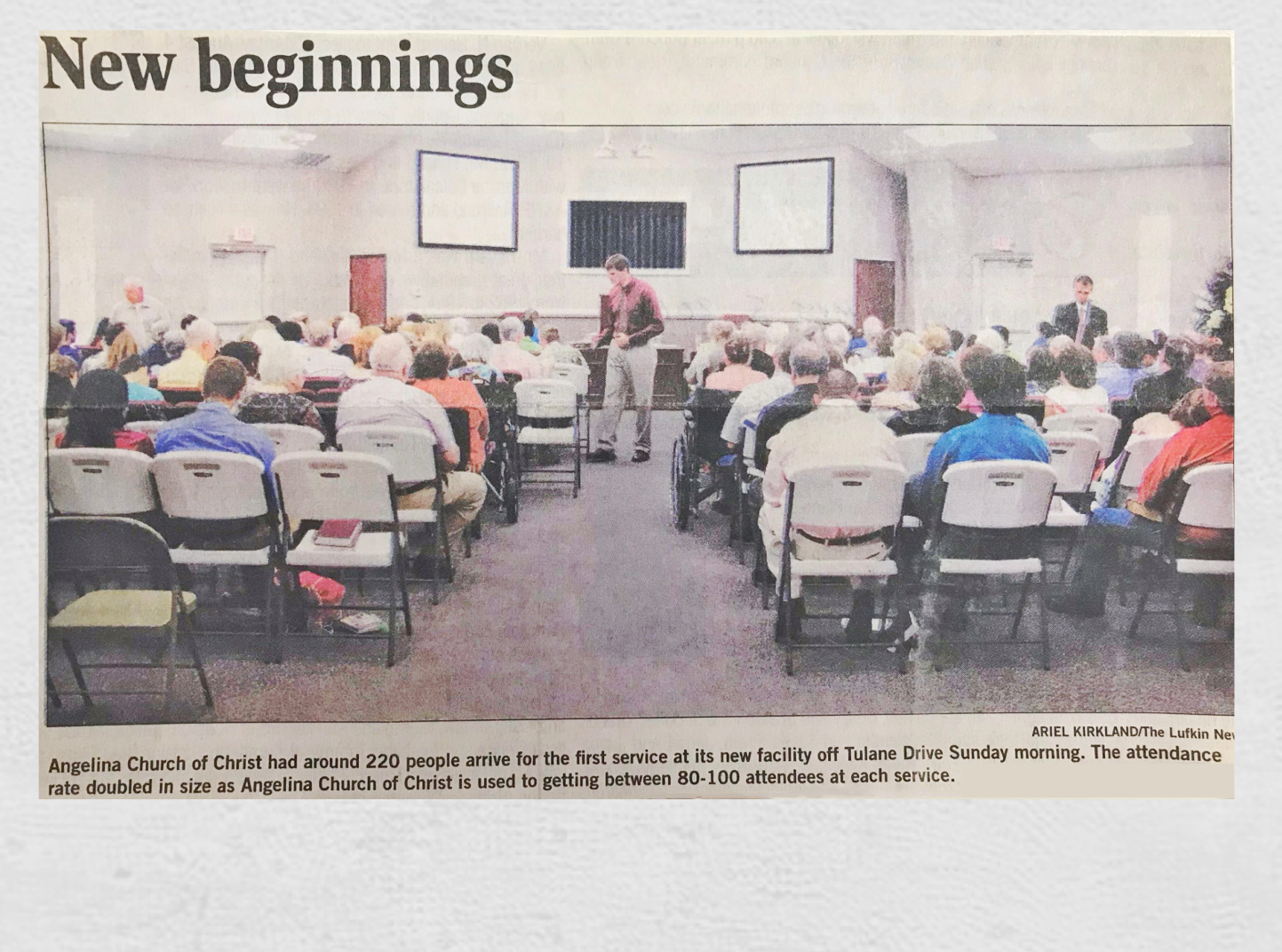 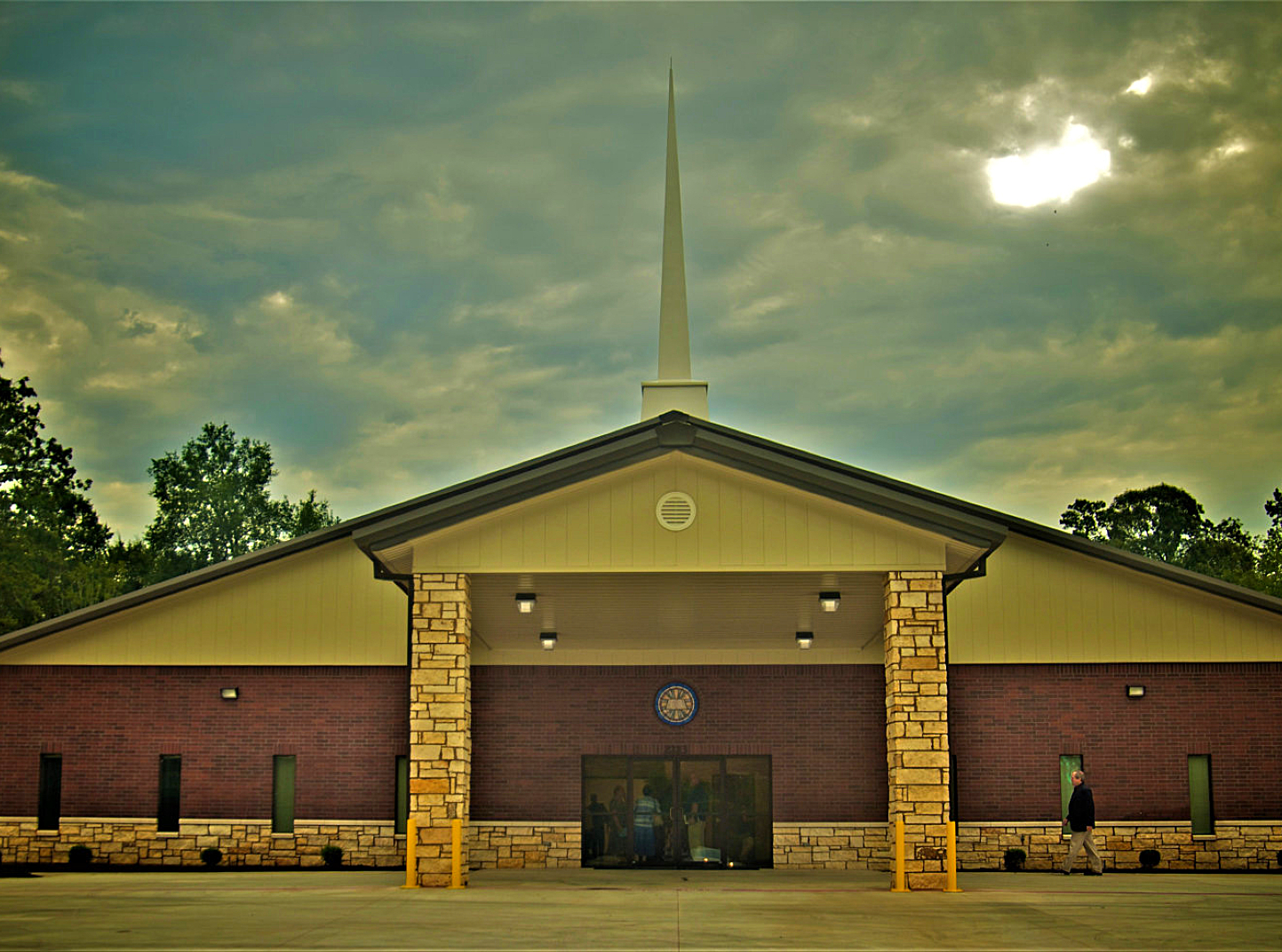 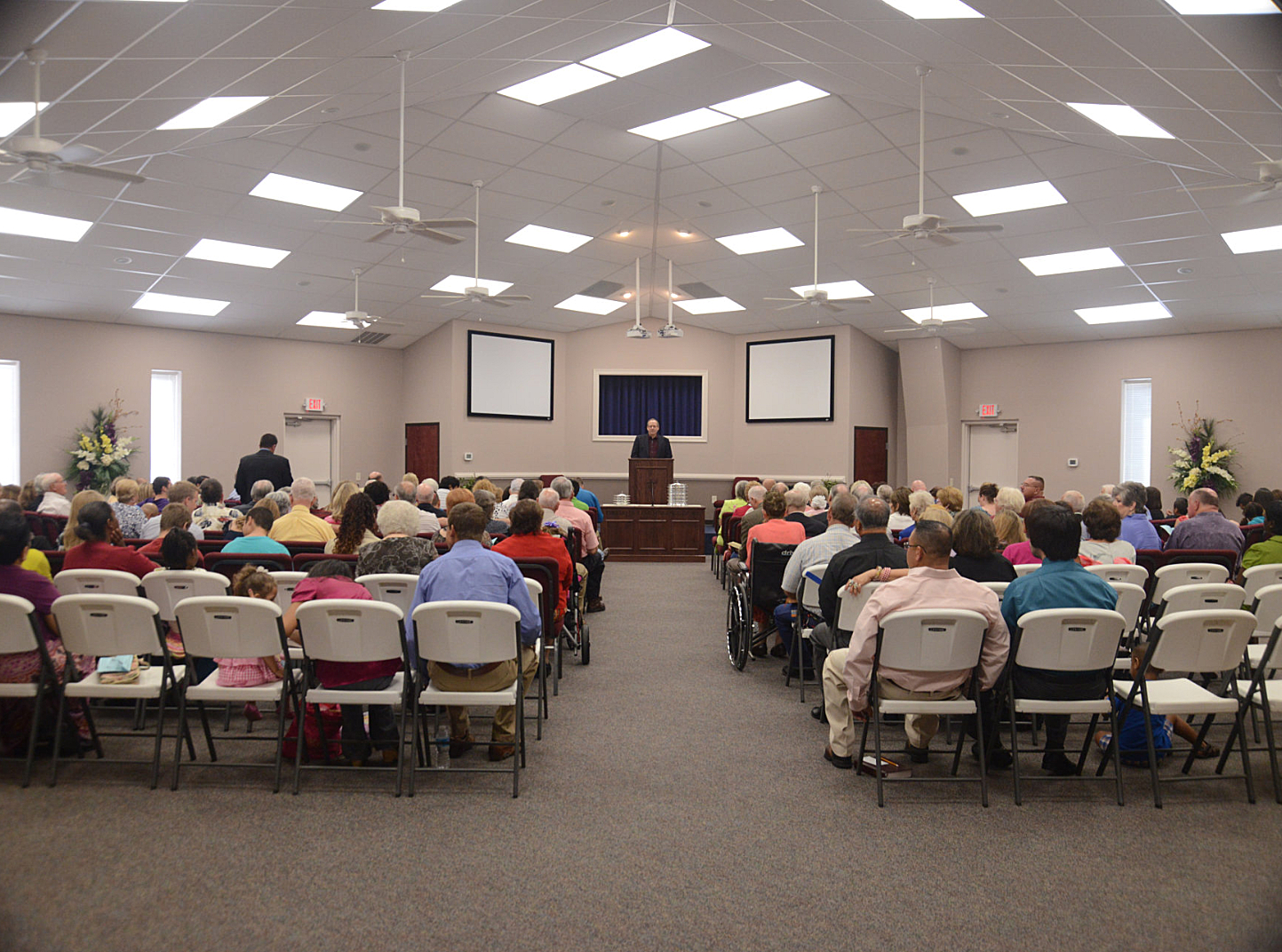 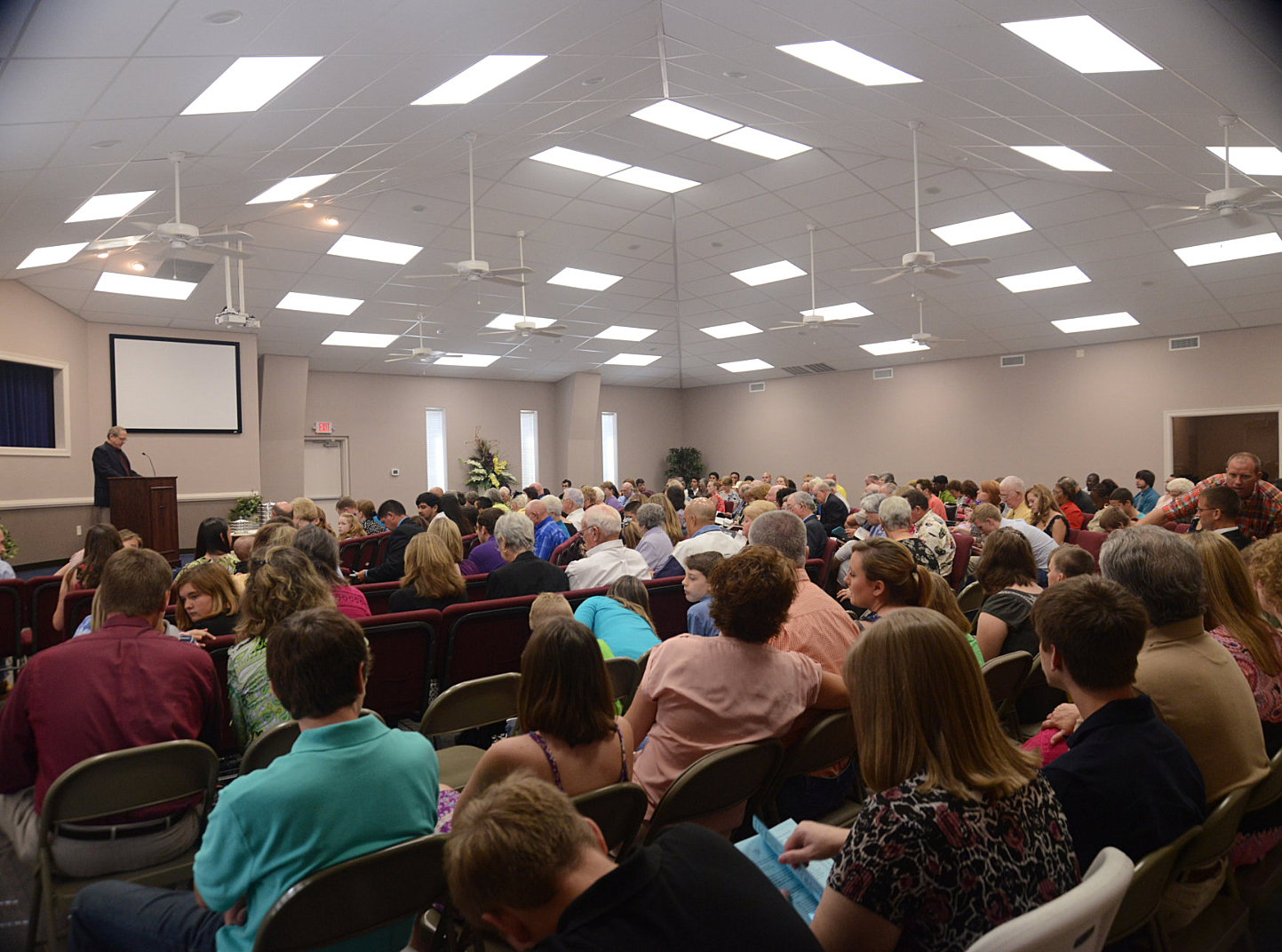 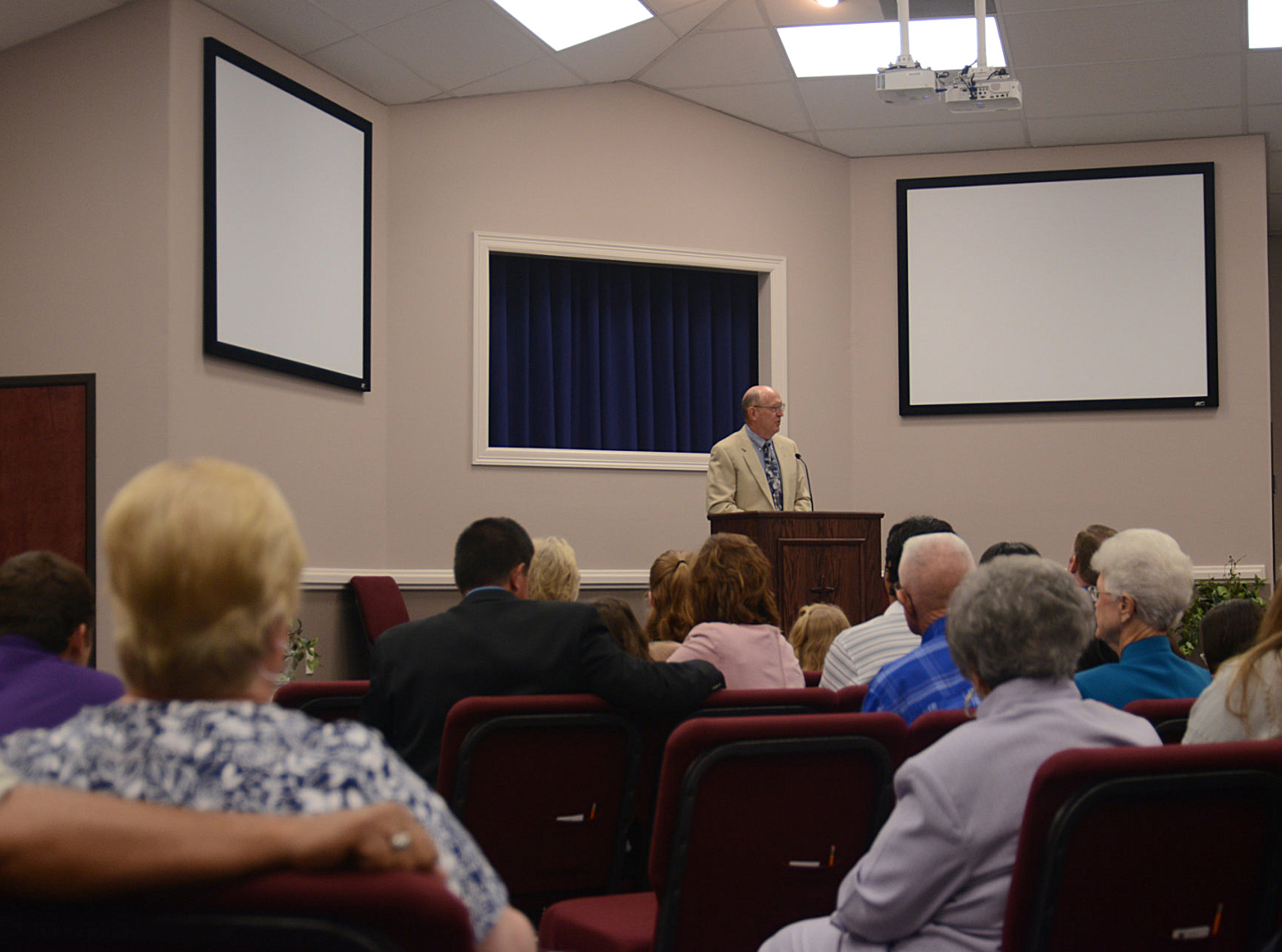 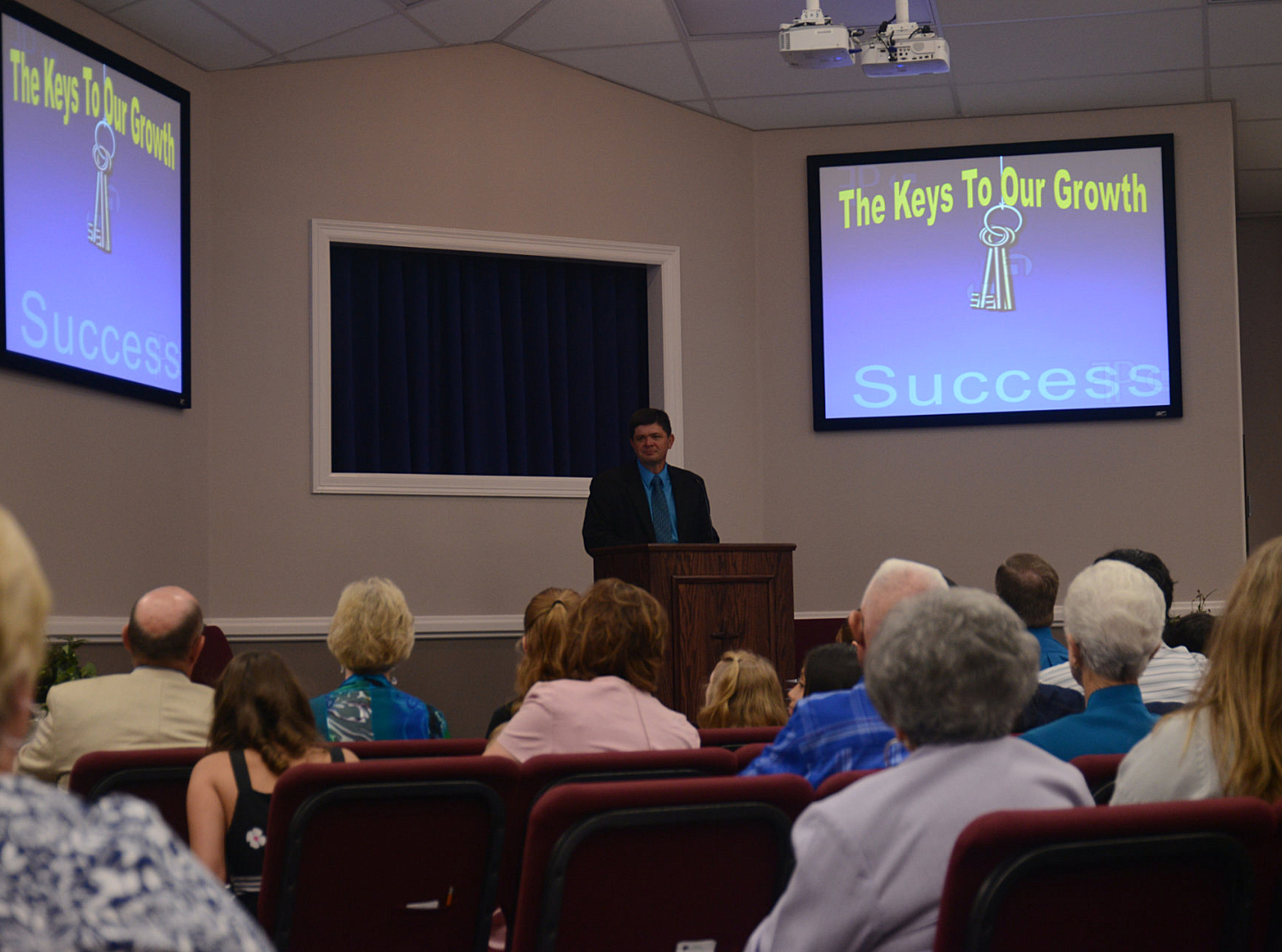 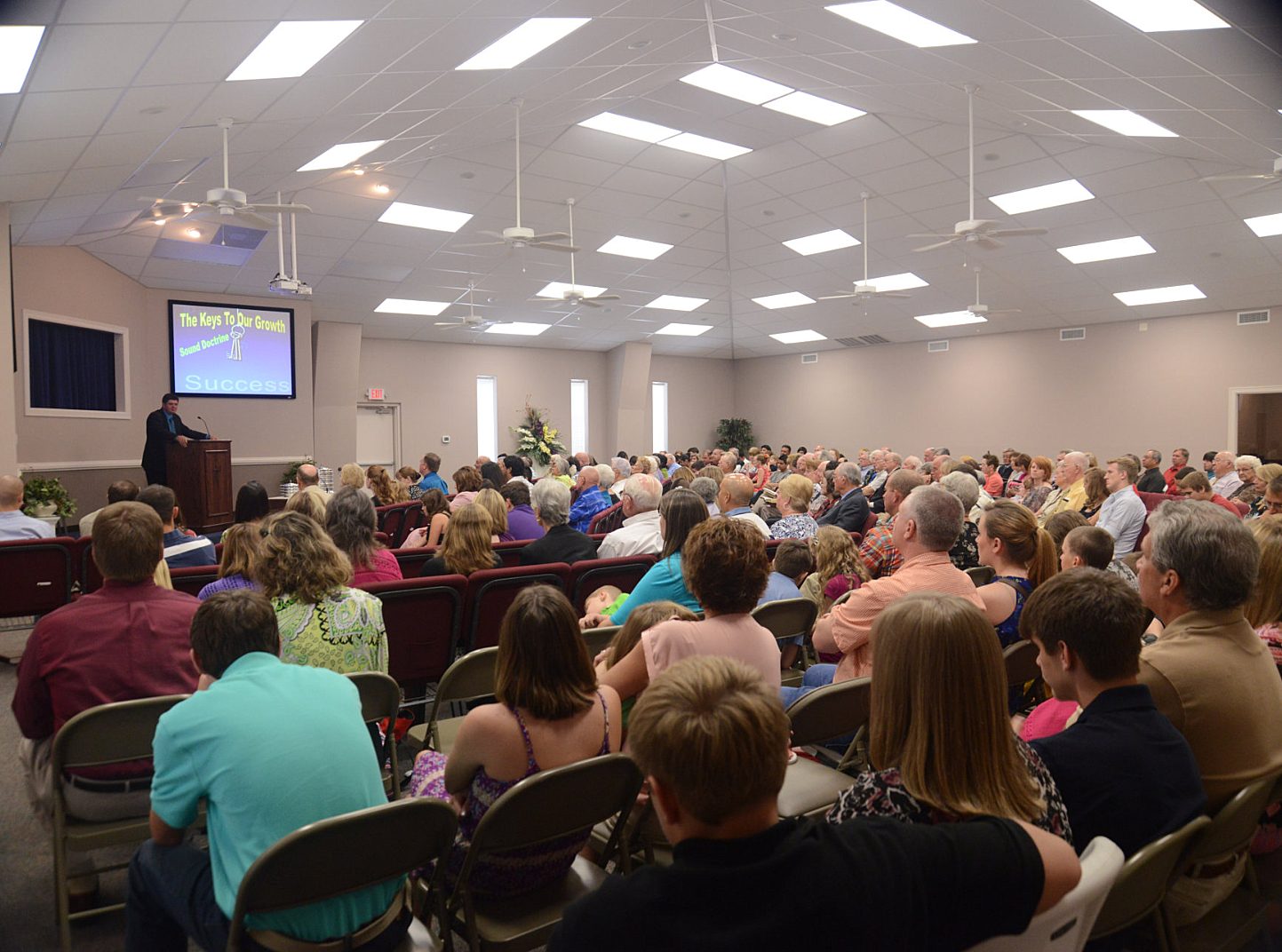 On March 16, 2008, a group of more than 70 Christians met, desiring to form a new congregation fully devoted to following only the Bible. All were united in purpose and thankful to be together.

Angelina church of Christ, led by newly appointed elders, Johnny Melton and Alex Weatherford, began meeting at the Lufkin Chamber of Commerce and The Red Barn facility while the search for a more permanent church home was made. Members were encouraged to use their talents for a variety of church activities and Eileen McKnight served as the congregation's secretary. While the word was being presented from the pulpit by congregation members Wes Basham, Hershel Bearden and Ellis Reynolds, the elders began interviewing prospective men to hire as a full-time minister.

Many new works also began, including Ladies Bible class, World Bible School, and India evangelism, headed up by Hershel Bearden. On June 25, 2008, Hershel gave a report to the elders covering the many successes he and others had during a trip to India, marking the beginning of multiple journeys to come.

On September 14, 2008 our congregation began meeting in a newly renovated rental property located at 210 Christie Street. Deacons Tom Crater, Ralph Fair, Brad Tiemann, Mark Townley and Joe Ben Vaughan were installed September 21, 2008. Less than two years later in June of 2010, Paul Hillier was hired as the pulpit minister resulting in an increase in our membership and outreach.

As our membership grew, a new search, headed up by Alex Weatherford and Tom Crater, was also begun for property where a new, larger and permanent facility could be built. After several months, the elders presented five possible properties to the members and 2213 Tulane became the chosen location of our new facility. In two weeks, $221,000 was raised to purchase the land and $45,000 was raised to create a money market fund necessary to proceed with a bond sale to finance the new facility. Not too long after that, $700,000 in bonds were purchased in a remarkable two-day period. God was given the glory for these blessings.

Member Mark Townley drew up plans for the new building and fellow member Melvin Linton was selected as the general contractor. Construction began April 12, 2012. After only one hundred days, the building was completed. Our first Sunday worship service was held August 5, 2012 with 220 people in attendance.

During this time, as Paul Hillier preached from the pulpit, our numbers continued to grow as did our zeal and enthusiasm in doing the work of the Lord. Hershel Bearden had long been involved in India evangelism and now various members were also making the trip half-way around the world to spread the word. The ladies of the congregation, who continued to meet for weekly classes, were also busy doing more good works for local hospitals and nursing homes. The men began a prison ministry and started meeting several times a month for lunch and breakfast to build each other up. Many members were also spreading the word through World Bible School and Bible studies were taking place in many homes.

Angelina church of Christ has been, and continues to be, an active congregation. Annual Gospel Meetings, Ladies Days, VBS, Summer Youth Series and Area Wide Singings have been both hosted and attended by our congregation. Our youth have participated in Lads 2 Leaders, Challenge Youth Conference, and attended summer Bible camps and singing schools at Ark-La-Tex Christian Encampment outside Houghton, Louisiana. We also hold an annual 4th of July BBQ, an annual fish fry, as well as monthly 3rd Sunday potluck lunches and 1st Friday night of the month Game Nights. These activities not only serve in keeping members of Angelina in fellowship with each other but also with fellow Christians throughout the area.

In September of 2015 Paul Hillier was diagnosed with brain cancer and, sadly, we lost him January 3, 2016. Sorrowfully, our elders once again began the search for someone to preach the word to us. On May 1, 2016, Doyle Bruce was hired as our full-time pulpit minister with Scout Betz becoming our co-minister on August 4, 2019.

Through the years, our congregation has been led by eight wise Christian men. Alex Weatherford has been an elder since the beginnings of Angelina. As mentioned before, he and Johnny Melton were both appointed May 4, 2008. Upon retirement, Johnny and his family moved to Lovelady, Texas in March of 2010. It was at this time that Hershel Bearden and Tom Crater were appointed. On April 6, 2014 Hershel stepped down and James Due, Ralph Fair and Ellis Reynolds became elders. On August 7, 2015, Tom Crater lost his battle with cancer. In January of 2017 Greg Fair became an elder and his dad, Ralph, stepped down in August of the same year.

Angelina church of Christ has been thoroughly blessed by our heavenly Father since its beginning in 2008. We are more than certain, as we continue to do the Father's will, He will continue to shower us with even more blessings.

"To God be the glory forever and ever! Amen." Galatians 1:5